Home » How to get rid of teen acne – Mumbai Mirror

How to get rid of teen acne – Mumbai Mirror 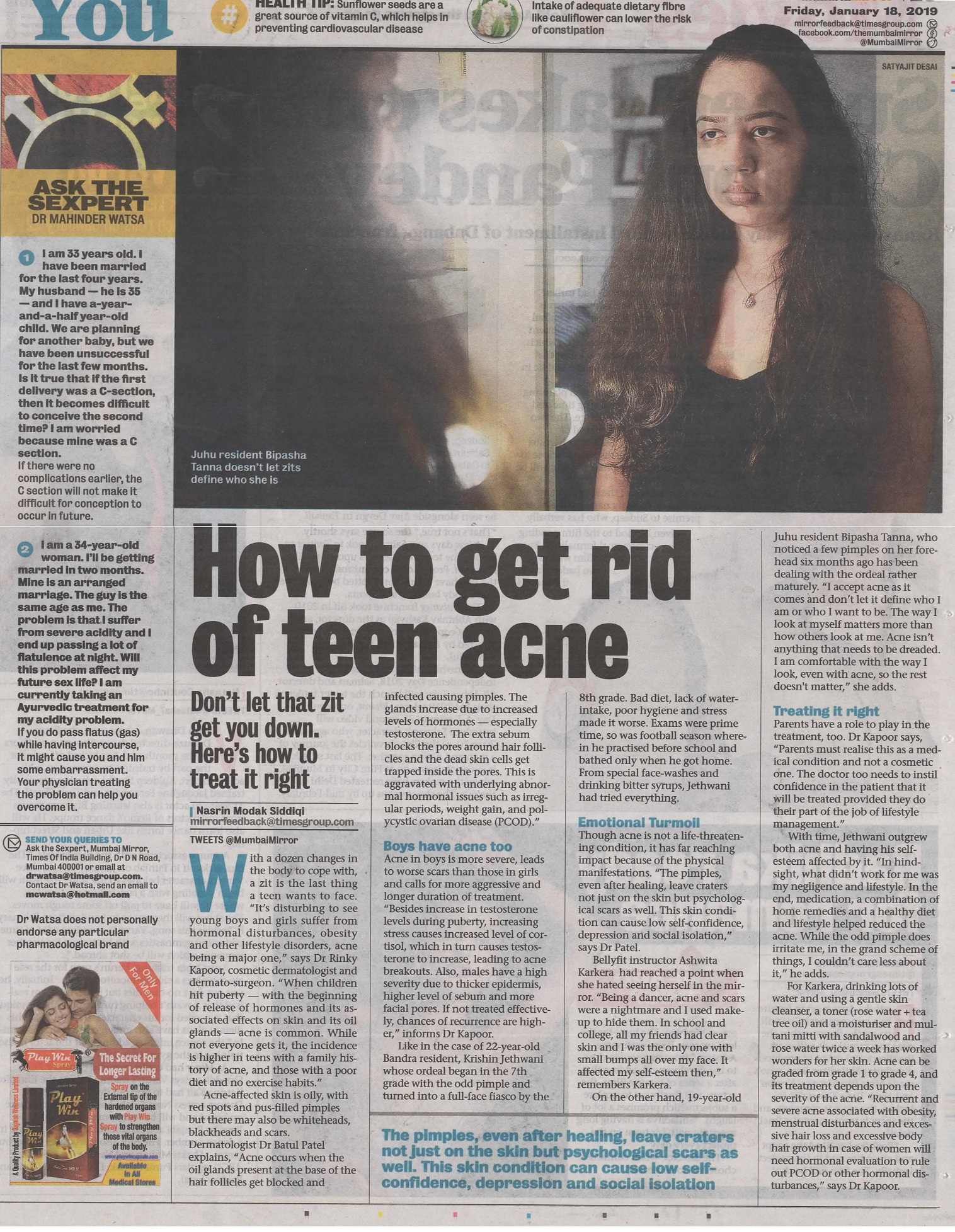 Don’t let that zit get you down. Here’s how to treat it right

The pimples even after healing, leave craters not just on the skin but psychological scars as well. This skin condition can cause low self-confidence, depression and social isolation.

With a dozen changes in the body to cope with, a zit is the last thing a teen wants to face. “It’s disturbing to see young boys and girls suffer from hormonal disturbances, obesity and other lifestyle disorders, acne being a major one,“ says Dr Rinky Kapoor, cosmetic dermatologist and dermato-surgeon. “When children hit puberty – with the beginning of release of hormones and its associated effects on skin and its oil glands – acne is common. While not everyone gets it, the incidence is higher in teens with a family history of acne, and those with a poor diet and no exercise habits.”

Acne-affected skin is oily, with red spots and pus-filled pimples but there may also be whiteheads, blackheads and scars.

Dermatologist Dr Batul Patel explains, “Acne occurs when the oil glands present at the base of the hair follicles get blocked and infected causing pimples. The glands increase due to increased levels of hormones – especially testosterone. The extra sebum blocks the pores around hair follicles and the dead skin cells get trapped inside the pores. This is aggravated with underlying abnormal hormonal issues such as irregular periods, weight gain, and polycystic ovarian disease (PCOD).”

Boys have acne too
Acne in boys is more severe, leads to worse scars than those in girls and calls for more aggressive and longer duration of treatment. “Besides increase in testosterone levels during puberty, increasing stress causes increased level of cortisol, which in turn causes testosterone to increase, leading to acne breakouts. Also, males have a high severity due to thicker epidermis, higher level of sebum and more facial pores. If not treated effectively, changes of recurrence are higher,” informs Dr Kapoor.

Like in the case of 22-year-old Bandra resident, Krishin Jethwani whose ordeal began in the 7th grade with the odd pimple and turned into full-face fiasco by the 8h grade. Bad diet, lack of water intake, poor hygiene and stress made it worse. Exams were prime time, so was football season wherein he practised before school and bathed only when he got home. From special face-washes and drinking bitter syrups, Jethwani had tried everything.

Emotional Turmoll
Through acne is not a life-threatening condition, it has far reaching impact because of the physical manifestations. “The pimples, even after healing, leave craters not just on the skin but psychological scars as well. This skin condition can cause low self-confidence, depression and social isolation,” says Dr Patel.

Bellyfit instructor Ashwita Karkera had reached a point when she hated seeing herself in the mirror. “Being a dancer, acne and scars were a nightmare and I used make up to hide them. In school and college, all my friends had clear skin and I was the only one with small bumps all over my face. It affected my self-esteem then.” remembers Karkera.

On the other hand, 19-year-old Juhu resident Bipasha Tanna, who noticed a few pimples on her forehead six months ago has been dealing with the ordeal rather maturely. “I accept acne as it comes and don’t let it define who I am or who I want to be. The way I look at myself matters more than how others look at me. Acne isn’t anything that needs to be dreaded. I am comfortable with the way I look, even with acne, so the rest doesn’t matter,” she adds.

Treating it right
Parents have a role to play in the treatment, too. Dr Kapoor says, “Parents must realise this as a medical condition and not a cosmetic one. The doctor too needs to instil confidence in the patient that it will be treated provided they do their part of the job of lifestyle management.”

With time, Jethwani outgrew both acne and having his self-esteem affected by it. “In hindsight, what didn’t work for me was my negligence and lifestyle. In the end, medication, a combination of home remedies and a healthy diet and lifestyle helped reduced the acne. While the odd pimple does irritate me, in the grand scheme of things, I couldn’t care less about it,” he adds.

For Karkera, drinking lots of water and using a gentle skin cleanser, a toner (rose water + tea tree oil) and a moisturiser and multani mitti with sandalwood and rose water twice a week has worked wonders for her skin. Acne can be graded from grade 1 to grade 4, and its treatment depends upon the severity of the acne. “Recurrent and serve acne associated with obesity, menstrual disturbances and excessive hair loss and excessive body hair growth in case of women will need hormonal evaluation to rule out PCOD or other hormonal disturbances,” says Dr Kapoor.